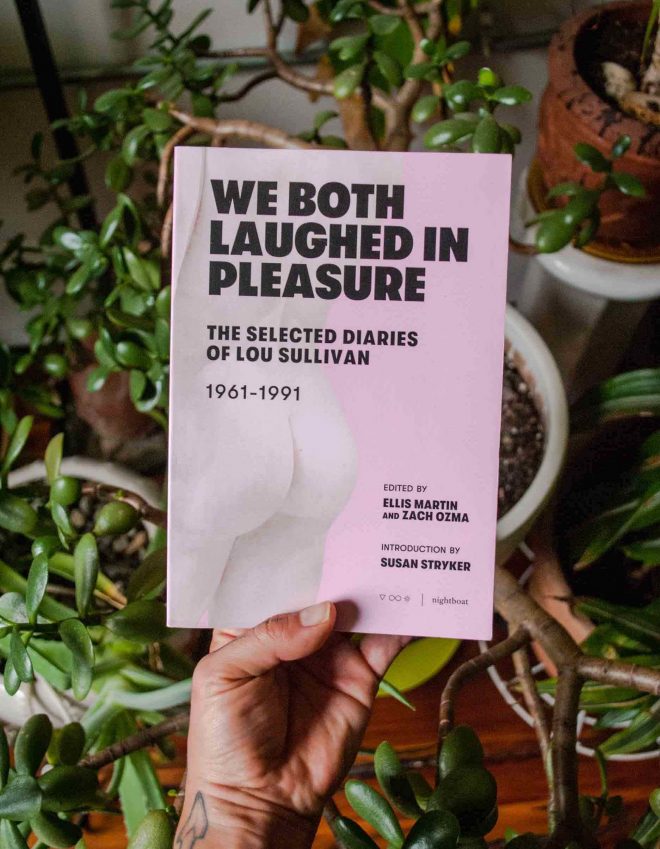 Monk Reviews We Both Laughed in Pleasure

Suddenly I saw a handful of queers were reading this. I wasn’t sure I cared, and then somehow it came up in conversation with my friend who immediately lent it to me (entrusted, really) to read. It’s a book made of diary excerpts, from the time someone is just a teenager in the time of Beatlesmania until their passing from AIDS at the start of the 90s. The diary is that of Lou Sullivan’s. I didn’t know who Lou was before reading this book. Lou was a trans man who was gay, and was someone who had to advocate for themselves over and over during an era when transgender men had to endure demonstrating attraction to women, for skeptical doctors, in order to gain access to medical treatments like hormone therapies and surgeries. By having to advocate for himself, Lou managed to create a network of support and community for others like him, and for that it feels to me that he is one of the people who contributed to so many of us today who have been able to engage with our trans desires on our own terms.

I have kept a diary myself from around the same time Lou’s begin. Reading his early excerpts reminded me of all my own adolescent concerns and emotions and ideas about the world. And it gave me that feeling of reading back on my own journals to catch glimpses of just where I really was emotionally and mentally, and that feeling of realizing how long you’ve really been the person you continue to be…if you get me on that.

I don’t think I’ve read much transmasc memoir? There’s the stories and essays from Pat Califia. There’s Leslie Feinberg’s STONE BUTCH BLUES, which was gifted to me by a transman at a time when I was starting my Saturn return (mine’s in Libra). A few years after that a lover gifted me James Tiptree Jr’s short story collection HER SMOKE ROSE UP FOREVER, which I read back to back with the biography JAMES TIPTREE JR: THE DOUBLE LIFE OF ALICE SHELDON. And the thing about reading WE BOTH LAUGHED IN PLEASURE is that I felt…very familiar with the steady patient sad acceptance throughout Lou’s entries, that Tiptree/Sheldon also recorded in their diaries (which are excerpted in their biography alongside letter exchanges with Ursula K LeGuin and Joanna Russ).

Both Sullivan and Tiptree/Sheldon journal about cis male lovers, wanting to be men, feeling accepted enough yet they perpetually can’t figure out why they’re so…something. Constrained, unrealized, continually mildly depressed. It’s too familiar to me, personally. I took pleasure in reading Lou Sullivan’s diary, and I felt called out to continue the ongoing task of seeking out more bodily joy and pleasure and belonging for my own damn self. If you’re into trying to intellectualize the reasons you are the way you are, sometimes it helps to see that it’s not just you. Then you can figure out what you wanna do rather than fixate on why you ~can’t~ do what you desire.

So that’s heavy I guess. I liked this book. Read it continuously over a few days. Hefty. Pink. Cute. My critiques come mostly from the fact that Sullivan was financially stable and white, and how I wish I could read something as beautifully presented that was from a brokeass multiply marginalized transmac person. Which makes me think that such memoir/writing is out there, but it’s not genre’d trans because it’s genre’d race or genre’d immigrant or genre’d urban, you know? Or that it’s being self published (hello!!) and I haven’t yet connected to the network of the 1 or 3 social media accounts posting about it.

That all said. Thanks Lou. Thank you.