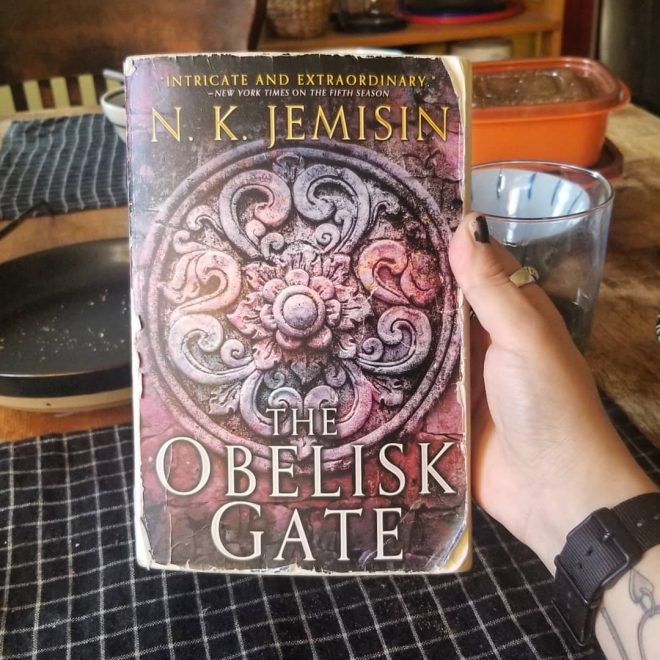 This review was originally posted direct to my Instagram on November 3rd 2019.

I’d been meaning to read N.K. Jemisin’s Broken Earth trilogy for a minute. People around me everywhere were saying how good this book was. Plus all three books of the triology won Hugo awards, which is a big big deal sci-fi fantasy literary award (these wins being unprecedented in the history of the award, and on top of that to a Black woman writer). People were like yo wow this is fantasy that actually accounts for race, doesn’t center a white-washed mythic medieval European aesthetic, is amazing blah blah blah.

I got my library card registered in the online system just so I could finally request a copy be sent to my local library, and then I read the 400 page+ book straight in a week. Actually I spent a friday night reading the last half of it while stoned. So good. Riveting.

Recommended if you like any of the above mentioned, and for anyone that likes a REALLY good story, anime where it takes till episode 11 or 15 before things realllly start getting deep, and so on. PLUS there is no Tolkien-style Eurocentric fantasy bullshit going on. Dungeons & Dragons should pay Jemisin a million dollars to license the story world for a brand new gaming system lol.

THE OBELISK GATE [book 2]
The depths that unfurl to this story’s universe are so good. This series so far has read like all my favorite anime, with fulfilling character arcs, reveals, and legendary feats of willpower. To speak of it any more than this seems like a spoiler. Read through it within a few days, it was so good. Looking forward to the last book!