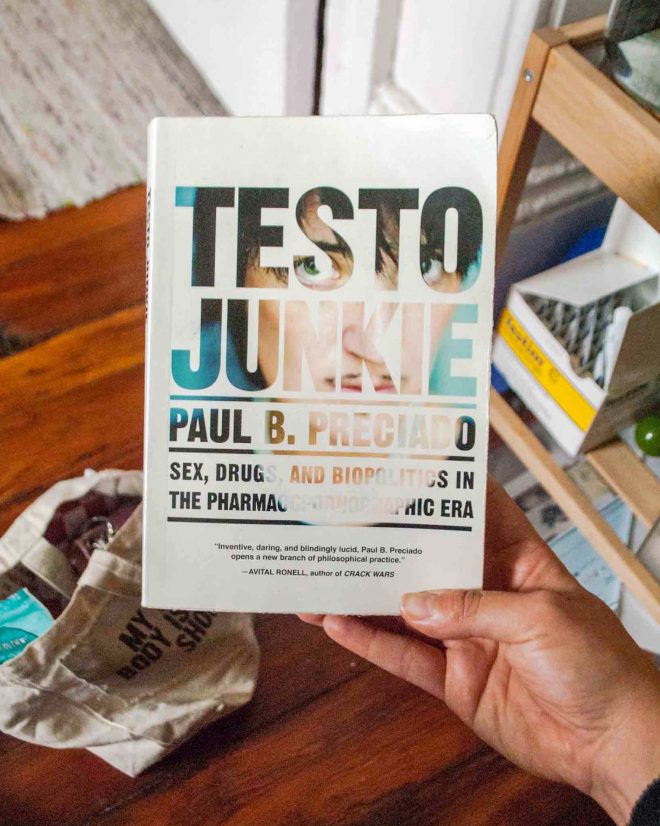 Sex, Drugs, and Biopolitics in the Pharmacopornographic Era

A group of us were sitting upstairs at Tattooed Mom’s after a reading I opened at the Wooden Shoe, when one of the attendees and friend of the headliner recommended me this book, suggesting I would find a lot to like about it. Me, a trans nonbinary person then still considering testosterone myself and obsessed with cyborgs of the pop culture and then Haraway sense. But naw, this jawn was excruciating to read. It’s taken me months.

This book is packaged as a cross between memoir and theory, but I thought it short on memoir and way too indulgent in the ‘theory.’ I found many of the paragraphs and sections to repeat themselves over and over with slightly different phrasings, as if intellectual/academic narrative style was akin to poetry or… I don’t really know what to call it. Like I got to a section on page 314 that I thought succinctly & plainly stated something that its preceding theory-dense chapters rambled on about, and I don’t know why it took so long to get there.

Many concepts-spoken-as-statements, the repeated use of a French phrase referencing a dense concept (orgasmic force), the insufferable stringing along of like… 4-5 syllable phrases (pharmacopornographic) had me OVER this book. I found it incredibly inconsiderate to the reader. I have to wonder if the original Spanish reads any less punishing. And then when it DOES manage (finally) to make it back to the confessional/personal chapters, it comes off to me that most of the book’s theorizing is based off of Preciado’s predilection for theory-speak and subsequent desire to describe their personal experiences through its self-legitimized style. For me, a lot of the global theoretical statements struck me as flippant judgement calls relevant largely within the author’s own daily life. And as a Goodreads reviewer pointed out, I found it lacking when it came to explicitly addressing race/anti-Blackness (it does this the most in footnotes which is very sparingly??). Again, the author is Spanish and living in Europe when writing the book, so there’s that to consider but damn.

I guess that most of what I found valuable about this book I already encountered in other areas like…Tumblr discourse, science fiction anime, personal experience/talking to friends, and other academic cyborg theory type books. Power to you if this book is your thing, but I just didn’t like it! I think this book is more for people who are well read in postmodern theorists, and by well read I mean DEEPLY, like maybe that’s what you do for a living.

Otherwise would not recommend.