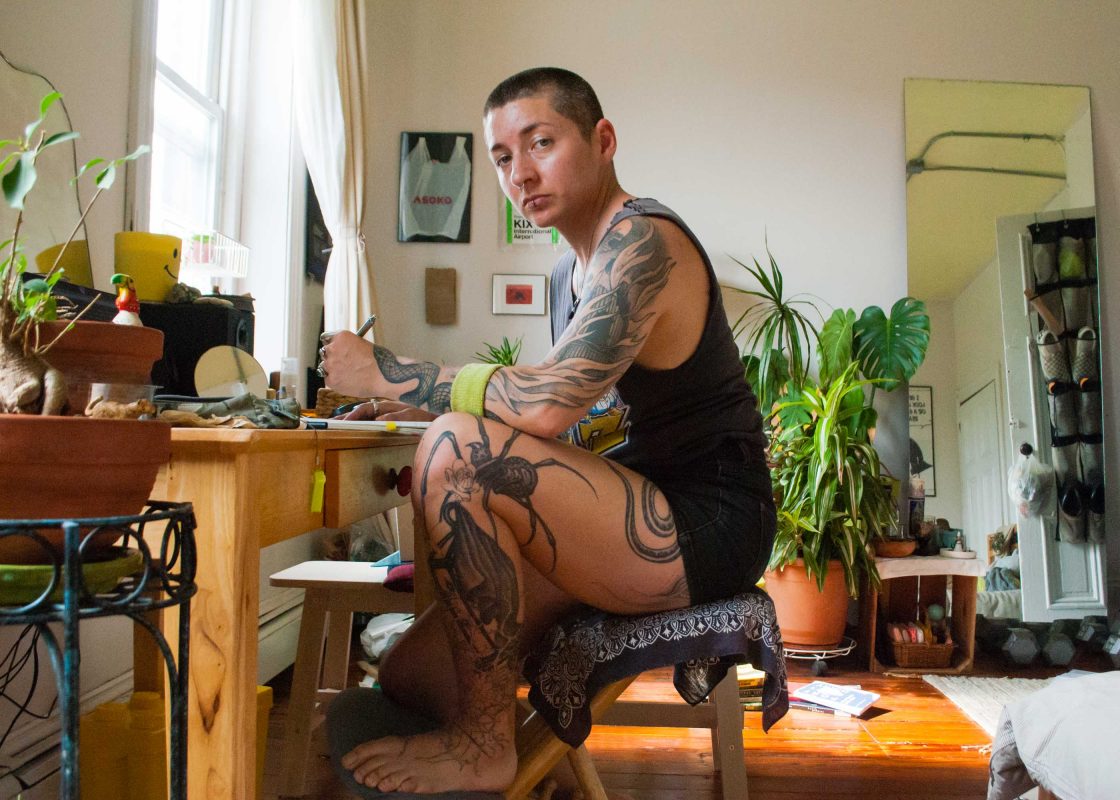 M Téllez is a heavily cyborg storyteller and sloganeer from the 215. They serve as Minister of Crossroads and founding member of the corner store sci-fi collective, METROPOLARITY.

M Téllez is a crossroads cyborg who writes and performs speculative tales about desolation/intimacy, class/objectification, borders/land-based memory/media control, and the violence in relying on binaries to order the world. They are a white mixed race person from a working class blended family, and born and raised by the city of Philadelphia*. M is frustrated/pissed with institutional legitimacy/charity, anti-Blackness by white assimilation, and fixed treatments of language and perspective. They serve as Minister of Crossroads and founding member of METROPOLARITY, a corner store sci-fi & thought collective that uses speculative thinking as a shield and wand against standing empire. They consider the common word a handy and inexpensive tool for deconstructing oppressive world-ordering narratives.

M is a Leeway Foundation 2014 Art & Change grantee and 2015 Transformation Award recipient. They are one of METROPOLARITY’s co-editors and a compulsive self-publisher. M’s short stories appear in several Lambda Literary Award nominated anthologies. They have guest lectured, performed, and facilitated workshops at The Free Library of Philadelphia, Swarthmore College, Allied Media Conference, Drexel University, Philadelphia Institute of Contemporary Art, Rutgers University, Haverford College, The New School, Moogfest, and others. They have performed on live radio, in front of crowds in basements, autonomous spaces, professionally mic’d stages, galleries, and community centers. M is knee deep in working on a ‘book’.

Have a mediated relationship through my coercive surveillance streams located @cyborgmemoirs and sign up to my monthlyish newsletter. Or use my Contact page for something more direct.

About All That’s Left

A book version is forthcoming, thanks to support from Philadephia’s Leeway Foundation.

The stories found on this site employ “he” and “she” pronouns for ease of linguistic flow only. Many of the instances of “he” and “she” are non-binary usages that can be kenned through careful reading and attention to nuance. The singular “they” is also used along with other lesser known pronouns for characters that don’t have or want specific genders (for example, hir and sie, xe and hen). Get into it. Language is a living tool and the users define the meanings. Language leaves the grasp of powerful dead colonizers as soon as we pull it through our teeth.

As a general rule, members of METROPOLARITY purposely employ colloquial-local grammatical practices and utilize tenses, temporalities, and points of view that may be jarring or unpalatable for many publications accustomed to institutionally reified forms of the English language. Our practices are deliberate and integral to the political and philosophical messaging within our work. However, this does not mean that we consider ourselves beyond reproach of editing and critique. Language is a tool.

This place is the continuation of the personal website I’ve kept since 6th grade in the late 90s, first on AOL Homepages, then to GeoCities (RIP 2010). Eventually I made the jump and bought this domain around 2003. Cyborg Memoirs has been the name of my personal website since 1997, beginning as an adolescent’s disorganized broadcast space on the Web, back in a time when the notion of free bandwidth was just dying out and the Internet was still largely the domain of anonymous nerds with access to desktop computers. My gratitude to S for continuing to host this cyber-lair of mine.

*Philadelphia is a European colonizer’s name for this land. It was stolen from the Lenni Lenape peoples through violent European settler-occupation. Every line of my family – and yours – is connected to the irrevocable changes that European expansion & Euro-centric cultural indoctrination brought upon the world. We already exist in the aftermath of an apocalypse.