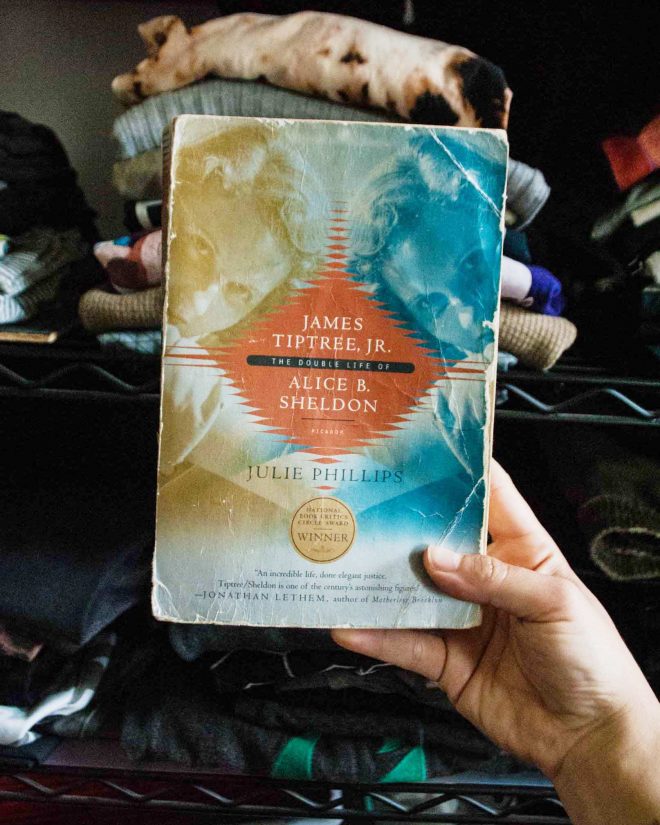 I got into this biography after reading Tiptree’s Her Smoke Rose Up Forever. Anymore I recommend reading both these books together, and recommend this biography especially if you are unpacking your own rage/grief at gender violence, paradoxical embodied existence, and are looking into 70s feminist scifi by way of trans memoir. Content warning for sexual abuse.

In a long (now dead) tumblr thread about Spock, involving Tiptree, who developed a raging crush on him, I wrote:

My original ref to Tiptree in this thread is indeed from Julie Philips’ biography on them. I picked it up after reading Tiptree’s short story collection Her Smoke Rose Up Forever. Reading the biography after, for me, confirms and lays out the sources of the numerous running themes throughout their work: intense disdain/helplessness towards the power/gaze of men, deep-seated internalized misogyny and alienation towards women (while desiring them at the same time), depression that the world races towards destruction (at the hands of white male sexual aggression), a strangely cloaked sense of gender dysphoria, etc.

The biography thoroughly lays out how Tiptree/Alli had an incredibly isolated life, a potentially sexually coercive/abusive relationship with their mom (a high society Victorian safari/travel writer), deep-seated rage at the institutionalized power of men and lack of power of women, and allllllll this homo desire that had No Way Out.

Alli concludes on their own that women are an oppressed class, then constantly has issues viewing themself as a woman and repeatedly attempts to classify what a woman is. They construct this theory for themself that there are two sexed genders, Men and Mothers (they are neither?)…and all of it’s riding on these old essentialist biological terms looking at primate behavior (Donna Haraway style), and it’s sad.

They have a letter writing friendship (as Tiptree) with Joanna Russ who wrote The Female Man, and Russ constantly is like TIPTREE I LOVE U BUT UR SEXIST, CHECK URSELF, and Tiptree is like o fuck wat is this feminism??? Alli is basically 60 years old before they start questioning who the fuck they are, why they feel the way they do, why they bifurcated their personality into this male persona (Tiptree the writer), and if they can reconcile it back into themself without the overwhelming desire to end their life winning out first. It’s some deep shit, to say the least.

A Goodreads reviewer also points out that the story the biographer Phillips tells seems untrustworthy at times, given the way she breezes past mentions of a sexually abusive dynamic between Tiptree/Sheldon and their mother, among other things. But to me it’s not surprising given the high society background of the person & family in question––families, especially upper echelon ones, tightly guard their intergenerational violence, preferring absolute silence to acknowledgement and healing. And to me this biography demonstrates that without having to say the worst of it outright.

Reading a report about child sexual abuse, she [Tiptree/Sheldon] found herself aroused, and was upset. She wrote in her journal on February 2

The distasteful proof that my sexuality is bound up with masochistic fantasies of helplessness […] depressed me profoundly. I am not a man, I am not the do-er, the penetrator. And Tiptree was “magical” manhood, his pen my prick. I had through him all the power and prestige of masculinity, I was––though an aging intellectual––of those who own the world. How I loathe being a woman. Wanting to be done to […]

Tiptree’s “death” has made me face––what I never really went into with Bob [Harper]––my self-hate as a woman. And my view of the world as structured by raw power. […] I want power, I want to be listened to. […] And I’ll never have it. I’m stuck with this perverse, second-rate body; my life.

A little later she wrote, “No doubt about it, I do not ‘match’ my exterior. I live in my body and my social presence as in an alien artifact. It commits me to a way of life that is not mine; could I somehow bring the inside out, fuse it? Not so much sweetness and cordiality; not so much desire to be admired and loved.”

This book is so heavy, full of pictures and diary entries and letter exchanges all so personal. And like the diaries of Lou Sullivan in We Both Laughed in Pleasure, it’s haunting and hard to read them continually suffer with their own dispossession while being in relationship with cis male lover/caretakers who apparently support them enough but aren’t able to fully engage with the ‘male persona’ they ‘contain’. “I paid a high price for marrying Daddy, for never breaking the mold. I remain the child, and now terrified of going on.” After Tiptree is outed as the ‘woman’ behind the pseudonym, Joanna Russ, in a letter, invites them to come hang with a welcoming lesbian community and act on their repressed desires. But Tiptree is unable to do so, unwilling to do what feels like abandoning the weight of their commitment to a husband and status career. The phrase ‘Don’t Die Wondering’ stings.

I meaannn and this is just SOME of what’s in the biography. I speak more extensively about it in the debut episode of my storytelling podcast where, after spending 21 minutes conversationally ranting about this biography and Tiptree/Sheldon’s transness, I also perform a dramatized version of The Screwfly Solution.