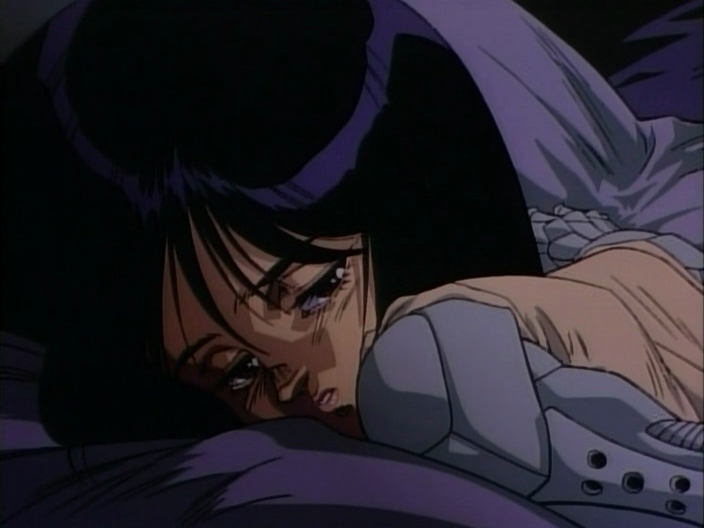 Alone in her tent, Kay was about to make the most of this week’s absurd blessing. Not that last week’s poolside ass-fucking hadn’t been appreciated, but it was so offensively predictable, and the hairless manicured bodies looked ridiculous. Ego stroking jerk-off material made by underage yups, always being misled about what their bodies looked like and eating it up anyway. This stuff on now, though, this high-production gem, was topnotch. The syncing was multi-layer on all the bodies involved, and you could switch between just the neural stimulation, the emotional response, or a custom combination. A-plus shit. Professional performers, for sure. These people knew how to make it ache. Knew how to tease. Maybe it was erotica, but then how did this good kink get approved for broadcast? Better not to question things.

In their four-person unit Kay was captain, and her posse knew not to go looking for her when she was sealed in her tent. When they first started out together, she had occasionally asked one of them in for some low-tek physical contact, but that didn’t happen these days. Not since the first few lovers’ quarrels, when she decided the interaction between physical bodies created too many complicated relationship dynamics for their isolated pack. Given their inability to access recreational drugs, the option to wi-fuck her crew in virtual fantasy scenarios was most appealing, and seemed pretty similar to sitting around and getting high with friends back home. Positive stimulation. Stress relief. At least it seemed that way to her.

Recently, though, they’d gone through some real bad shit that left everyone tender and wishing for the past in a bad way. Their day-to-day experiences were becoming oppressively dismal, and they still had a long tenure to fulfill on the front. Depression was setting in. Rahl, whom she was usually so close to, had become distant and unreceptive to any attempts at syncing for mutual “stress relief.” Meanwhile, she and Braga had been connecting on the regular in these lush virtual play scenarios, maintained by the vigorous combination of their imaginations; Braga liked to be topped and she liked his submission. They never talked about it in the flesh.

Suli, the third of her subordinates, was something else. That kid. . . It was a miracle that nobody had killed him by now. He was outrageously entitled, out of touch with reality, and the only one of the four of them that became a Surveyor for the hell of it. He was from the domes. He was stubborn and refused to acknowledge the fact that the domes themselves were an abominable last stand of the capitalist elite, always insisting that it was simply one of the safest places a person could live in this day and age. He was an agent of destruction, who only fucked manicured bodies and was bad at hiding his intense fear of acknowledging his privilege. But that was only after you got to know him. On the surface, he was charming and romantic, and highly skilled.

Kay, yet to hop onto the full stream, was still hanging around watching a muscly little cub writhe around. For all she knew, Suli was actually synced with that oiled-up cub, and the prospect of punishing him in such a removed way was oddly compelling. But no, after listening to Braga’s recount of how their patrol in Nalji went, it sounded like Suli didn’t even know about the streams, which she couldn’t quite make sense of. The streams were produced by Channels in the domes. Suli was from the domes. Suli didn’t know about the streams? Which meant that he didn’t care about them, or that he spent his alone time getting his rocks off some other way. What the hell did he get a Surveyor body for exactly, if not to utilize all those hyper-tiered receptors? Kay would have mulled over this further, except that she was about to be dick deep in the hottest ladyboy on broadcast if she hopped on now, and—

There was a request-to-enter sigil pulsing for attention on her tent flap. She reigned in her connection with a huff. The moaning faded into the background of her inner monologue, receptors cooling back to just her own body’s input. Kay rose, pulling back the tent flap with a mild sneer, annoyed out of sheer principle at the interruption.

“Well look who it is,” Suli’s smirking face started. Of all people. . .

“The fuck do you want?” she glared, exaggerating her displeasure to see if it would register with him.

“Can I come in?” he asked, more like a favor than a subordinate request. Kay gave him an unamused stare-down and then stepped back, impatiently gesturing him inside. In the moment it took her to turn around, he plopped himself down on her sleeping pad, palm in chin and already playing with a twist of fabric. She cocked an eyebrow at this and stood, arms akimbo, scowling.

“Get the fuck outta here with that shit,” she sneered, sucking her tongue in disdain.

“No, really, though!” He gazed up at her pleadingly. She stared at him as one might do a strange animal that was trying to convince you to take it in. Some misaligned part of her personality began rising, suggesting she hear him out. Maybe he was lonely. Maybe he was actually going to process some emotions with her. Maybe. . . if she gave him a chance, posse’s morale could improve. She crossed her arms.

“I thought you might have Rahl in here with you,” he said next, oblivious.

“Why would he be in here with me?” she asked through a clenched jaw. This fucking kid.

“I dunno,” Suli shrugged. “I thought he was having a rough time lately and like, needed company or something. I just wanted to see, I guess.”

“Well, wait,” he jumped. Kay waited for him to continue. He seemed nervous, but Suli was clever enough. He sighed at himself. “I guess I just wanted to see if you were busy.”

“For what?” she demanded sharply, tired of his dawdling.

“If you wanted to like, hang out, you know?”

“Hang out? Like what, chit chat into the night like we’re on a stoop or some shit? Come on, Suli, the fuck is wrong with you? We’re out here on—”

“No, no, not like that!” he pleaded, trying to buy time. “I don’t know. I just figured you might want some company. A little tenderness, right? Like, I realize you like Braga and Rahl a lot more than me, but I just wanted to see if you wanted to try something again?”

“You know. . . Some physical stuff or something,” he said, eyes imploring.

“I thought you liked your ‘women’ to have ‘tits’.” Kay dished with a snort, repeating verbatim a line Suli had said to Braga the day before. She watched his gaze drop and his mouth open, searching for something to respond with, until too much time had passed and he only looked up at her with an impish smile. Then,

“Well so what? I always thought we had a good time.”

Kay began to shake her head, lips pursing open as her sense of bewilderment organized into realization. She recalled the handful of times they had flirted and messed around, secretly, in the corners of offensively massive, perversely wasteful dome structures, before they had been deployed on their first run together. That was before she figured out he was one of those old fashioned types ignorantly obsessed with the sensations of his own penis and unwilling to accept pleasure elsewhere. A square.

Slowly, “Do you have a thing for me? Or are you just looking to get off?” She watched his face.

He gave her a noncommittal shrug, still hopeful for action with the ambiguous motion. When she didn’t respond to his passive aggressive tactics, he realized he had miscalculated the situation. Suddenly, he was being yanked to his feet by his shoulder. She looked mad.

The tent filled briefly with the harsh sound of a smack. Suli quickly buried his face into his shoulder, but she gave him a hard jerk instead and walked him through the tent flap to the outside. Dead silence and only starlight outside. His vision automatically adjusted and he could see her eyes narrowed to slits, with a mean set in her jaw. She tossed him forward, and next her reconstructed voice was in his head.

//listen, this isn’t the time for acting like a dickhead. go hop on 7-70’s broadcast if you wanna mess around, and *don’t* come to my tent again when you see it’s off limits. got it???//

A pout in the darkness. Suli said no more and crept back to his tent. He thought 7-70’s broadcast stream was awful, especially this week’s. They couldn’t just put something normal on. It always had to be some freaky body-switching S&M thing. Hot girls would suddenly grow dicks and then you’d have to go down on them and it was just, like, whatever. You could never just have sex with someone normal. Like, ever.

Suli was a dying breed living in an immortal body.

Back in her tent, amidst the wash of virtual sweat and skin, Kay wished for the domes’ collapse.