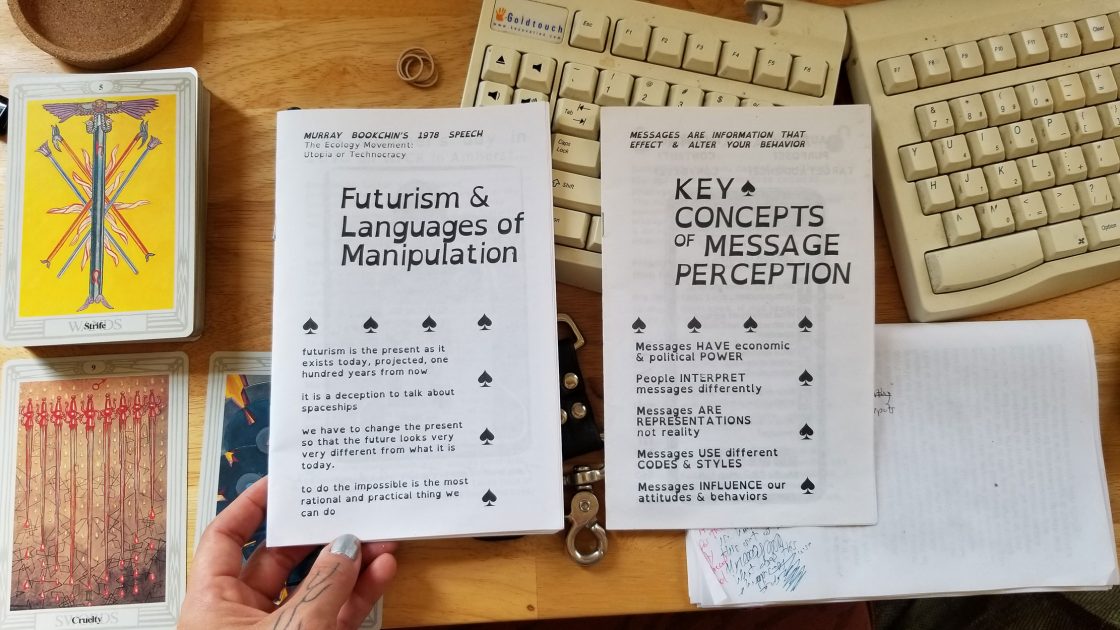 This content was originally shared as an edition of my DHD newsletter. There, I recommend that you listen to a casual audio overview of the educational pamphlet below, ‘Key Concepts of Message Perception’, complete with the ambient background sounds of summer in Philadelphia 2020.

you have to forge yourself into a weapon

is something I wrote first as a personal spell, then a shared spell, then we published it in Metropolarity’s STYLE OF ATTACK REPORT (which is again down to the last 8-10 copies—would anyone miss it if we didn’t reprint? it can’t go out of print just yet can it?).

Forging oneself into a weapon is for the purpose of wielding yourself, by your own hand.

How are swords made? We may share a popular image of a man bent over a raw glowing blade, hammering away, tempering it through alchemical process. The material is combined, melted, cooled, heated, folded and then battered down in on itself, blow after cadenced blow.

While you wield yourself, you are also the one who forges. The Wielder, the Forger, the Weapon. Or the Tool, if you prefer. (There’s a lil holy trinity for you to meditate on.) With the experience material in their body, the Forger full of discipline and dedication, tempers the amorphous into something clearly shaped, clearly defined. Shape Change, Olamina commanded.

“[It] occurs to me that when something of great volume is forced through a small opening it generates great pressure—and that pressure creates force, and force is power. I’m reminded of the scene from DUNE where the Fremen learn the Weirding Way—that their focused voices have the power to shatter stone. I can understand why you would be filled with rage at this deplorable world. I hope that you can focus that anger through your powerful voice and shatter something as hard and seemingly impenetrable as stone. I’ll protect my eyes and laugh like a fool.”

Some weeks ago I taught a workshop called PROP WERX:

Learn to read between the lines, hear what’s not said & more in this propaganda dissection workshop. We’ll pick apart ads, movies, headlines, conversations, and other content with a simple repeatable technique.

The audio is solely an walk-through and discussion of the material in the zine. The audio is meant as a supplement to the pamphlet tool itself. You can view & download the pamphlet-zine via these Dropbox links below (dismiss any account creation prompts, no account required).

The other day Philly writer, beat maker, and area podcast celebrity John Morrison tweeted this to the timeline

And I read through that whole thread and retweeted its morsels to my own timeline, and then I was like damn I need to read the whole thing, a transcription of Murray Bookchin’s 1978 speech made at the Toward Tomorrow (renewable energy) Fair in Amherst, MA. And at the bottom of the whole article was a comment from a reader saying, the transcription was good but the original speech had a lot of interesting contextual points otherwise left out. So I listened to that next. And from there I decided I would transcribe the missing parts of the speech, combine it with the Uneven Earth one, and make a free zine out of the whole thing cause I liked it so damn much.

I fuck with this speech. Here is the printable. I added food for thought exercises at the end.

What is futurism? Futurism is the present as it exists today, projected, one hundred years from now. That’s what futurism is. If you have a population of X billions of people, how are you going to have food, how are you going to do this… nothing has changed. All they do is they make everything either bigger, or they change the size—you’ll live in thirty story buildings, you’ll live in sixty-story buildings. Frank Lloyd Wright was going to build an office building that was one mile high. That was futurism.

The simple fact is, I just don’t believe that we have to extend the present into the future. We have to change the present so that the future looks very, very different from what it is today. This is a terribly important notion to convey. So a lot of people are walking around today who sound very idealistic. And what do they want to do? They want multinational corporations to become multi-cosmic corporations [laughter from the audience]—literally!