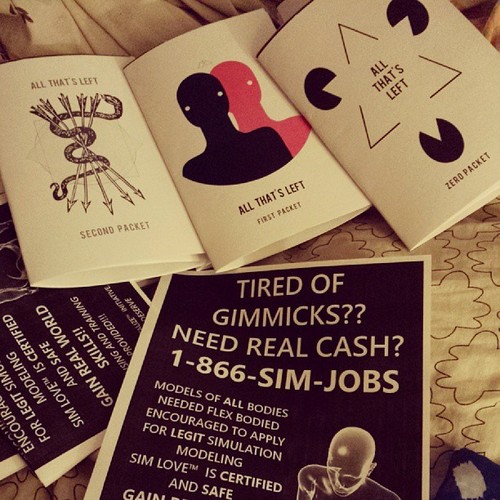 The fate of All That’s Left zine

As the web master/low-key archivist of mine and METROPOLARITY‘s efforts over the years, I recently realized that there was little mention or even an image of my old All That’s Left zine series here. Although ATL is a featured category of my writing and likewise a persistant feature of my draft stories pile, would you know that from the years of 2012 through 2015 I produced and distributed a series of episodic trans cyborg anime zines and audiotapes?

My old Tumblr following sure did. The local area freaks and roadside sci-fi fans of Philadelphia did, too. But as the imperial calendar years progress and I insisted on not reprinting the Prototype Packets collection of the three individual zines (because I would soon enough release a longform expanded version that has yet to happen), I realize that this thing that so firmly defined my storytelling existence has fallen out of general awareness.

When METROPOLARITY formed, I put nearly all of my energy into its needs. We put out several zines. We did events. We did performances. I feverishly wrote stories just to read at our recurring Laser Life event. And almost in anticipation of our formation, I had just taken to making print zines and doing ambient soundtrack-backed performances of the stories just to let the people around me know I had thoughts and feelings beyond the banter of identity politics and social events.

This was all in a brief period during and after the Arab Spring and US Occupy movements, before the owning class’s tech-corporate dominance of this Turnp era behavior-modifying, behavior-tracking social media platforms (which openly work with the state against its citizens/users/sources-of-income). Tumblr in the early 2010s felt then like a fresh image-heavy iteration of the early 00’s LiveJournal community-driven blogging platform, and my Tumblr served as an image and mood board of dystopian cyborg-heavy anime screencaps x technology & geopolitical news x niche design & high fashion x trans & queer race & class longposts and deeply personal self-reflective writings. This era of Tumblr to me felt like a phantom time of consciousness raising, for many of us who dwelt there. Since Tumblr put its bizarre gender-binary specific and anti-sex work censorship practices into place (along with all the other main media platforms deriving a profit from user submitted data), and because I deleted my personal Tumblr in a rare-for-me reckless moment of painful identity crisis a few years earlier, I wonder sometimes who I’ve lost contact with.

What also happened is that I wrote two short stories in a year, and the next year and year after that they were both in trans speculative fiction anthologies and up for Lambda awards. I wrote a couple of articles for magazines I read, was interviewed a few times by interesting people – all of this you will find announced as news here – I was in the midst of attempting to make myself a legitimized writer in the the owning classes’ logics of worth.

Something that I can never be too sure of is another person’s understanding of my position in this white supremacist society and thus my access to resources. It is a fact that I am a white mixed person who daily reckons my place within the matrix legacies of Christian colonization efforts, Indigenous genocide (on multiple continents), and chattel slavery of stolen African peoples. And it is also a fact that the generations leading up to me – my forebears – assimilated into whiteness with an unreckoned legacy of imperial Roman>Spanish>British oppression (haunted by grief and void). And for these shadowworld reasons, in the wakingworld I don’t have the credentials that a land-owner’s child might in this white supremacist society, and it enrages me to see my options for attempting to gain them –– I’m talking about upward class mobility. The other day (as of my writing this) Jamie Berrout, of the Trans Women Writers Collective and Booklet Series, shared her thoughts and an essay titled against publishing (a letter to trans women writers against the mfa, literary awards, the myth of meritocracy):

Publishing at every level reinforces the fiction of meritocracy, which “has become the key means of cultural legitimation for contemporary capitalist culture” (Jo Littler), which “is one of the foundational and erroneous ideals of white supremacy” (Brittany Cooper).

She writes explicitly for trans women of color. So though I am not who she is directly speaking to, I take her messages very seriously because one, they strike a nerve with my own inclinations towards the literary and publishing establishments, and two, they push me to question my stopping points and compromises with engaging those same establishments.

In this time since I sold the last All That’s Left Prototype Packets zine, I’ve gone and continue to go through many reckonings. Too many things from those stories became reality. Dystopian writing felt urgent at one point, and then it became a fog and now feels like fantasy. I have this draft introduction to the longform ‘book’ that I’ve been working on (for so long it now feels), one part saying that this book is a fantasy, a much-needed personal vent. Like expressing a kink, maybe.

I wrote the original twelve or so stories of All That’s Left during a period of my life that some people describe in terms of their Saturn return. I was uncovering my own deeply denied and repressed desires, hopes, and despairs, and was in a rage to express them all and be listened to. Years before that, in the midst of leaving a lengthy and formative abusive relationship, I conceived the All That’s Left universe and its characters as a private/secretive exercise in autonomy and escape.

So although I covet a mythic conventional success in writing, I have little interest in crafting All That’s Left into a sellable book product for an English-speaking mainstream market – maybe I will play that game for another project, to secure resources for me and mines, but for All That’s Left the lengths I would have to go to surpass my position and get access to such a national platform appear unseemly and ill-fated. What I want to express and how I want to tell this story are at odds with the flat-line progression of empire, and I do not believe in the might, right, and romance of empires. Yet I want to be known and I want to communicate with you, dear reader, in profound ways beyond conversation.

If you have listened to or read my Discipline Welcomes Beauty grimoire, then I expect you’ll understand me when I say that I set down the living word as a witch does – to transmit knowledge through the dimension of time-space. Knowledges born of self-reflection, self-admission, and in relation with the thresholds of the worlds around and through me.

This is a moment in time. A humid June night of the full moon, on a low hill within a territory once called Lenapehoking now the post-British colony post-industrial American city Philadelphia.

Amidst workshops and meetups and side projects, I am still writing the tales of All That’s Left, and I hope you will receive something from them as I render them forth.

My gratitude to my loved ones and neighbors (physical and digital) for their outright/slow/subtle/serendipitous support.