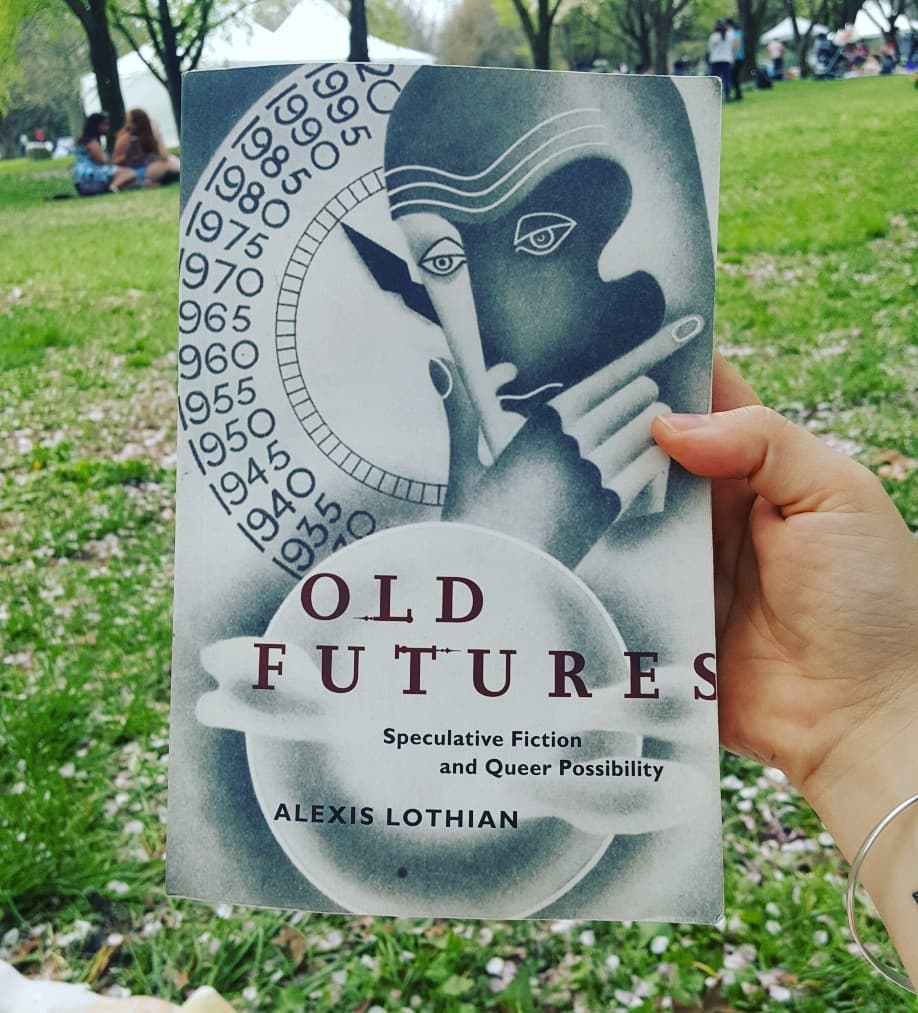 This review was originally posted direct to my Instagram in May of 2019, so I will keep all the markup from that original here.

I came across this book in @pennbookcenter* >> Alexis Lothian’s OLD FUTURES: Speculative Fiction & Queer Possibility. Very much an academic’s book, yet well worth reading if you have the wherewithall for dense intellectual sentence-smithing. The book is structured with spherical chapters and wormholes between them, which I enjoyed given its dwelling in temporality/moments in time. For those of us writing #afrofuturist and #queerscifi, reading this book may feel like a synthesis of the obvious – it speaks to how SF is constructed by our lived experiences and how science fiction can essentially be survivor memoir. (Let me pause to state the obvious – I am not Black – so please consider my ref of afrofuturism here a nod to those in my networks who are.) I haven’t picked up an academic book in a minute now, mostly cause I’m so over the hard linear method required of academic writing. In contrast, I found Old Futures easy to read and furthermore kind of grounding – it made me feel like there was a bit of a history to position myself within as a storyteller.

There’s a chapter on the nightmarish dystopian fiction and its fixations on reproduction of the species/the category of ‘female’, by white women writers in the midst of World War I. There’s a chapter on Black futurity, afrofuturism, and how the tropes of white supremacist dystopia/utopia lose their meaning & narrative use, given the ways Black people are rendered outside capitalist logic/‘human’/subject-object modes of being.

There’s a chapter that reads heavily from Samuel Delany (who will be at @hotbitsfilmfest next Friday!) and other queer fag writings that aren’t interested in reproducing heteronormative imperialist futures. There’s a chapter on how hollywood/film scifi is so fucking straight white male imperial capitalist and how SF that isn’t doesn’t have the same access to production. There’s a chapter on remixing and vidding culture. There’s an epilogue. It’s decent. I liked it. There were a lot of readings of texts that I was familiar with, and references to others that I ended up checking out. It’s worth mentioning that the author is a white woman – I found the parts on Black futurity well cited, and the author herself positioned in a way that was careful (throughout the whole book actually) to remind the reader this was her mere interpretation/consideration of something she could not be an expert in or source of. There were a feww sentences that I found to be a little presumptive, but overall I took the writing to be an overview/introduction/connection than hijacking or appropriating for non-Black purposes. And yet I write this as a white mixed person so there’s that, too.

Overall I’m like damn this was a thorough book converging multiple marginalized areas of thought/media production, in a concise and interesting way, even for a mean critical bitch like me. I’m like not bad! Not bad for academia. The bibliography is hearty as shit, if you’re looking for recommendations on what to read/watch/listen to. But if you’re already dwelling in underground cultural production, you’re probably already on to it all. “Old futures stands as a reminder that no matter how dystopian the future seems, somebody somewhere will be trying to remake it. There are always new ways to live in the old future.”
#monkreviews #inspiredbyalexreviewsbooks #antiauthoritariannerdswhoenjoyacademicwriting #oldfutures #dystopiautopia

*Penn Book Center announced it’s closing at the end of May, much to mine and many other’s dismay. I just want to take a moment to vent my anger/grief about closing bookstores, and remember a tweet by Mattilda B Sycamore where she asked what the point of an independent bookstore was if all their titles were the same from place to place? I believe she was on book tour when she tweeted this, and commenting on how all the bookstores she was in essentially carried the same titles from the same monolithic wholesalers, and where were the local authors and really underground shit?? I thought to myself, for a small or volunteer-run business/bookstore, you order from the wholesalers because you don’t have the capacity to organize and run an independent system. Shout out to places that do consignment, that have people who work to call underground publishers and local authors and let them know they need more stock – it REALLY just comes down to that. I don’t work in a bookstore but a boutique where we carry some books, and honestly, despite all these various presses being out there, these nationally distributed books all ship from the same Ingram/Penguin/Random House monolith. Ever since @metropolarity was a fledgling zine, I’ve long thought about how to access the motherfuckin means of production and distribution networks. That’s how Amazon is able to ship people shit within an hour in dense cities anymore – distribution infrastructure. That’s how empires function.