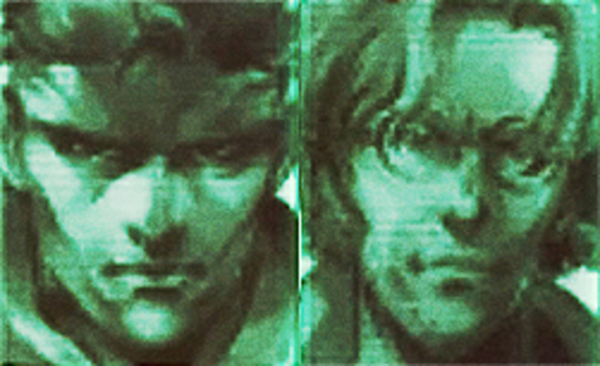 While not a hardcore Metal Gear Solid fan, I did have an appreciation for Snake & his hacker nerd remote partner, Otacon after writing this 2006 fic for a friend’s request.

Solid Snake had done more than his fair share of training. From practically the womb on he’d been conditioned, institutionalized. Put through every scenario, every simulation. Anything that could possibly go wrong, he had either already been through, or had been trained to.

To say the least, he’d been through some stuff.

But not this stuff. Not this…

“Come on, Snake! Don’t be a weeny about it! All those times you had to eat whatever you could find and now you wanna chicken out of a little hot-dog-eating contest?” Otacon nudged his friend with an excitement heard only when he was talking about techy stuff or anime.

A big smile on his face, glasses slipping down his nose, he stopped nudging a second later and crossed his arms in a small moment of defeat. It was all right, he’d let this idea simmer with Snake…just another few minutes. They still had time before the sign-up period ran out.

“Why, Otacon. Of all the things going on in this place, all the contests, why are you insisting I enter this one?” Wearing his trademark grimace (albeit less harsh, they were at a fair), Solid Snake turned to his friend, that well-trained look on his face having made many men crumble before him. But Otacon wouldn’t be put off by his moping…no, they were buddies.

“Becauuuse, Snake. They’re awarding the winner of the contest a year’s star treatment to Good Dog! Don’t you know how much I eat there?”

“Don’t you know how many times I’ve gotten us dogs from that place?” Snakes eyes widened with a slow realization.

“Not the chili cheese dogs with the relish?”

“Yeah, Snake. That place. You know that we could benefit highly if you won. And you wouldn’t be working alone.” Otacon kept up the positive hype. Snake was beginning to turn…

“Are they using Good Dog hot dogs for the contest?” he asked earnestly.

“Um, I actually don’t know. But listen Snake,” he said quickly, wanting to avoid any ‘downtime’ at all costs, “I’ll be with you the whole time.”

“You were planning this all along, weren’t you, Otacon…”

“What if I was? I think you know the outcome is unavoidable.”

Seven minutes later, Snake was up on stage with a plastic apron tied around his neck and a pitcher of water at his side. Otacon had managed to brief him on the dynamics of contest eating, concerning hot dogs, anyway. The throat mic was set up and concealed. Everything was in place.

When the foghorn sounded, Snake tossed all of his concerns to the wayside, and with a zen-like concentration (or lack thereof), he set in on the towering platter of dogs before him. Just be hungry, hungry like that time in the rainforests of Peru.

Snake awakened suddenly (what the…) to the sounds of foghorn blasts and cheering. Two men were rushing towards him from either end of the stage. A sickening sense of urgency shocked itself into his system, yet despite it, he just could not move. Was this another mission? Had he been drugged? He felt woozy. Maybe he’d been given gas…

One of the two men grabbed him forcefully by the wrist. He tried to pull away, but feeling so heavily drugged (was he?), he could only sit there while the man jerked his arm over his head again and again. More cheering. He did not feel good at all… beginning to lose consciousness again… just make the cheering stop, stop the…

“Snake! You did it!” He shuddered awake to the cheerful voice of his friend.

“Yeah, it’s me! I can’t believe you just did that! Truly amazing, Snake!”

“Did what?” He was starting to come to a little more. Slowly. A quivering hand reached down to cup his distended belly.

“You won! You destroyed the competition! And you didn’t even need my help!”

Otacon clapped a hand down on his friend’s shoulder, evoking a pathetic yelp never before uttered from Snake’s drool-smeared mouth.

“Yeah! I’ve never seen anything like it! You were going pretty slow at first, and then it was like you went into some sort of trance! Did you learn that somewhere? You were like a machine, Snake! My god!”

Snake turned just enough to better look up at his blithering friend, turned just enough the other way to see his stuffed competition and the still cheering crowd, and then lurched forward on the table in front of him. A woman screamed. In the distance something broke. On the table, was Snake’s vomit, a tiny but poignant array of half-ingested wieners and soggy buns laid on the once empty platter before him. He felt ten times better.

The things you did for friendship.