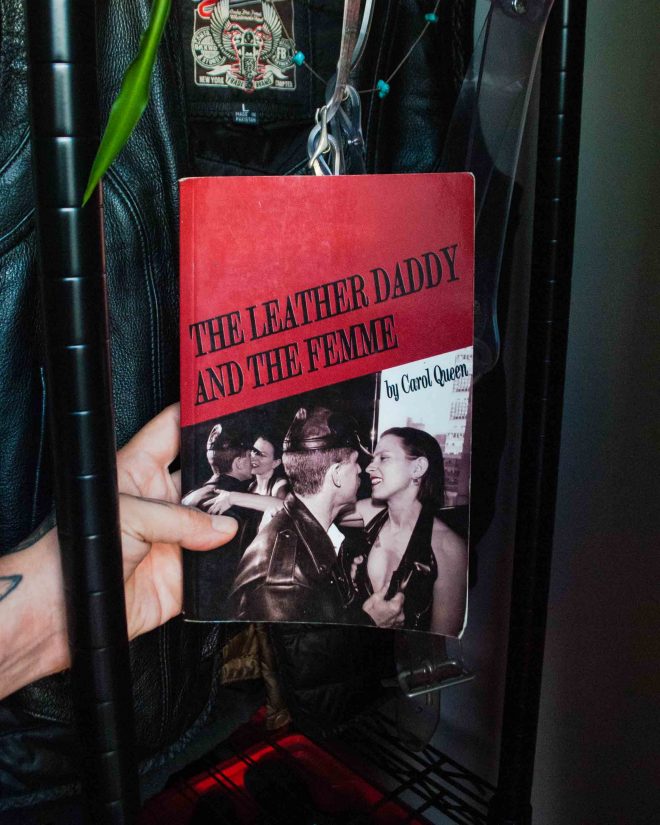 Monk Reviews The Leather Daddy and The Femme by Carol Queen

I ordered this book alongside DOING IT FOR DADDY. I read that one first and when I got to Carol Queen’s contribution in the anthology and it was a chapter from this book, I jumped immediately over to read Queen’s entire book from there. THE LEATHER DADDY AND THE FEMME is so good and hot to me. I have found it surprising that out of the freaks I know who are avid readers of 90s dyke queer leather scene fiction, it’s from me they first hear about this book.

A cis dyke femme who goes cruising in a boy persona winds up taking home a leather daddy on a whim, and in the midst of their hookup the daddy seems completely unphased by the body under the clothes. This hookup is hot to me. Chapters alternate between their daily lives and conversations about attraction and politics and bucking limitations to hot scene this and hot scene that. Very nice and satisfying to read, for what turns me on, and their conversations settled a handful of my own hangups. So, I’m very fond of this book.

Fiction that makes story arcs out of smut and sex and character dilemmas with their fears and limits is so good and seemingly rare to me. I think this may be more prevalent in manga/smut comics, or at least that’s where I’ve been exposed to more of it… But whichever way, I treasure this book.

Another one to lend, to bring home, to display.

The following is my 2016 goodreads review:

It was a pleasure to read this book, another in a historical canon situated in 90s gay/dyke/trans/queer San Fran scenes that I otherwise have no interaction with than reading about them in these tales people took the time & effort to pen. To date, I have felt wary towards this historical canon for its overwhelming whiteness and wonder what stories must be left out from these eras on that account. That said, The Leather Daddy & the Femme opens up super hot from the very first page, with a dyke femme daring to cruise a leather daddy that turns her on, and it just keeps going. I feel like stories that feature characters from ‘opposing camps’ often prefer to focus on how outer conflict tears their relationship apart, and I was worried this book might do the same as it progressed. Luckily, it’s not about that. The subtitle “An erotic novel in several scenes and a few conversations” is exactly what the book is, and I SO appreciate this format over a traditional Western conflict-oriented linear narrative. The chapters oscillate between characters’ memories of hot times they had, hot times they’re having or planning to have, and conversations between them that play out more like gay historical exposition and not giving a fuck about the gender binary and people’s need for social formality.

“Maybe your problem is that you came out in an era when queer people spend more time theorizing than they do in the sack.”

A suggested read if you’re a borderwalking pervert surrounded by too many identity politic warring sides.