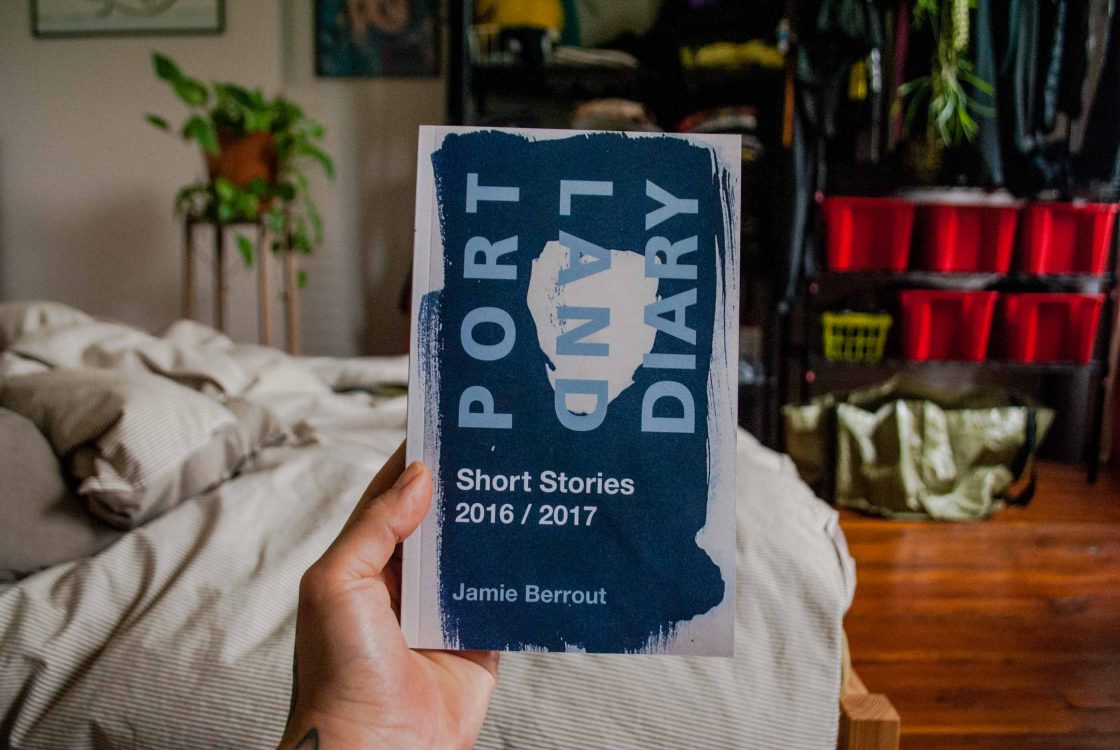 The promotional description of this book is good and apt.

Portland Diary is a collection of short stories about women faced with impossible situations. Each of the seven narratives unfolds its heightened, speculative version of the impossible everyday reality we find outselves in as racialized people, queer and colonial and mentally ill subjects, enemies or collaborators to the bloodthirsty Western imperial machine, disposable labor for a capitalist system that threatens to devour the world. In “Mansion,” the story that opens the book, an unpaid intern falls into a nightmare after realizing how little she’s worth to the locah HRC-esque non-profit she’s been sacrificing herself for. And the book progresses through dystopian futures, ecstatic visions of liberation, narrow escapes, and betrayals until the last story, “Waiting Room,” where a trans woman and an android woman form a bond while waiting for surgery consults that promise to bring them a measure of freedom.

PORTLAND DIARY is so good and impressive and of a caliber that would be a widely read and critically acclaimed body of work were it not for the author’s dispossession by society as a trans woman of color. PORTLAND DIARY is chic in size. There are seven speculative short stories. Each story brings you intimately in to the waking toll of both the protagonists’ everyday life struggles and extraordinar(ily dystopian) circumstances. These stories are all explicitly from the perspective of a trans woman of color. Many of them detail unnerving and distressing surveillance and police states, the horror of which many institutionally supported contemporary fiction writers could never so thoroughly capture.

To me, the stories in PORTLAND DIARY communicated the aching oppressiveness of a willfully ignorant white society that shrugs its shoulders at the demands of anti-Black global capitalism and ignores history. These stories communicate the internal horror and denial one forces upon oneself in order to “function” and “survive” under capitalism and the complicity it coerces out of us.

To me, who finds gleefully dystopian science fiction completely late and distasteful (a form of tourism for the protected classes), the stories of PORTLAND DIARY communicate what life is actually like IN the reality of the white imagination’s cyberpunk dystopia, when you’re not white and your body, its perceived-by-the-onlooker gender, and behavior are completely surveilled and policed by all you encounter.

A number of the stories dance in vengeance plots that feel incredible to read. Others are experiences in hope, despair, desire, the weight of violent society bearing down on you and you feel yourself wearing away and don’t know what will happen and yet you persist. Some stories carried on in a such a way that I wondered, with only another page left, what it was all developing into. Then the final sentence would hit me and I had to hold the book to my chest and let the feeling fully unfurl.

Every story was amazing.

I’ve been a fan of Berrout’s writing since she had been releasing drafts and excerpts from her earlier work, Incomplete Short Stories and Essays, on tumblr. Early drafts from this book were posted on Berrout’s Patreon, where she continues to post what she’s currently at work on. Do yourself a goddamn favor and follow/$upport her and the Trans Women Writers collective of which she is a part.