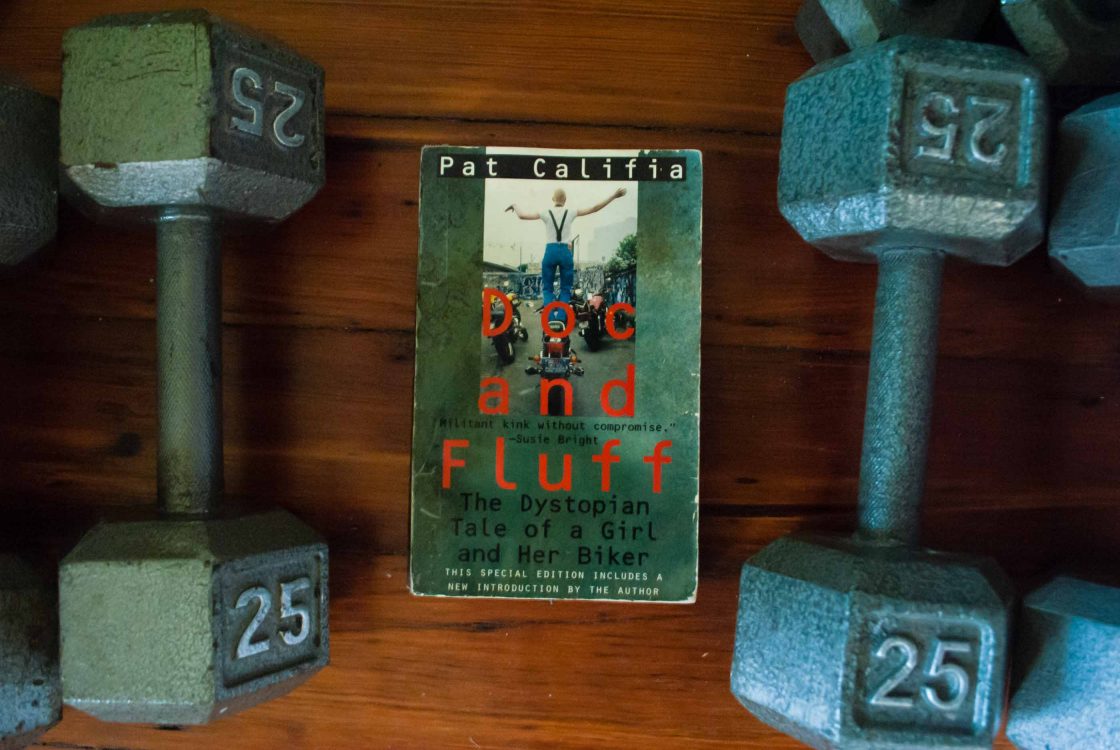 My copy of this book has a foreword from the author more or less calling critics out over the violence in the book, chiding them to basically get real. I realize many people out there don’t bother to read the forewords or introductions to books, but I’m not one of them and reading that on my way into what I was anticipating was a grimy dystopian smut tale by Our Father Patrick had me a little nervous.

DOC AND FLUFF coils itself around some harsh sexually violent biker scene shit, and there’s especially one scene in the book that I’ll say I never plan on reading ever again. To date, I’ve always warned prospective readers about it, since when I read the book I was deep in recovering from old untended sexual trauma and it fucked me up. So, it can be rough for that.

And It’s a time capsule from the 90s. Califia–who now uses male pronouns–has said in interviews how aggressively ostracized he was by second wave feminist lesbians for his predilections towards leather and sadomasochism and masculinity itself in his writing. Knowing some of Califia’s background or at least some dyke history deepens DOC AND FLUFF’s characters and road warrior style dystopian setting into a social criticism of its time.

There’s a network of dyke-run farm communes, where “ex-hets and passing women” (passing for men, they mean) aren’t afforded the same rights within the farms as the native-borns. There’s a sex worker femme with a butch dyke partner that doesn’t respect her enough nor knows how. There’s a rough bisexual biker gang whose members play violent dominance games. There’s dyke daddy taboos. There’s hustlers and pussy lickers and witches.

I imagine if you haven’t ever been in with rough and dangerous types of deviants and homo freaks before, DOC AND FLUFF can be scandalous and upsetting. It’s sort of a scifi, sort of an alt reality, and neither at the same time, which is why I found it worth reading.