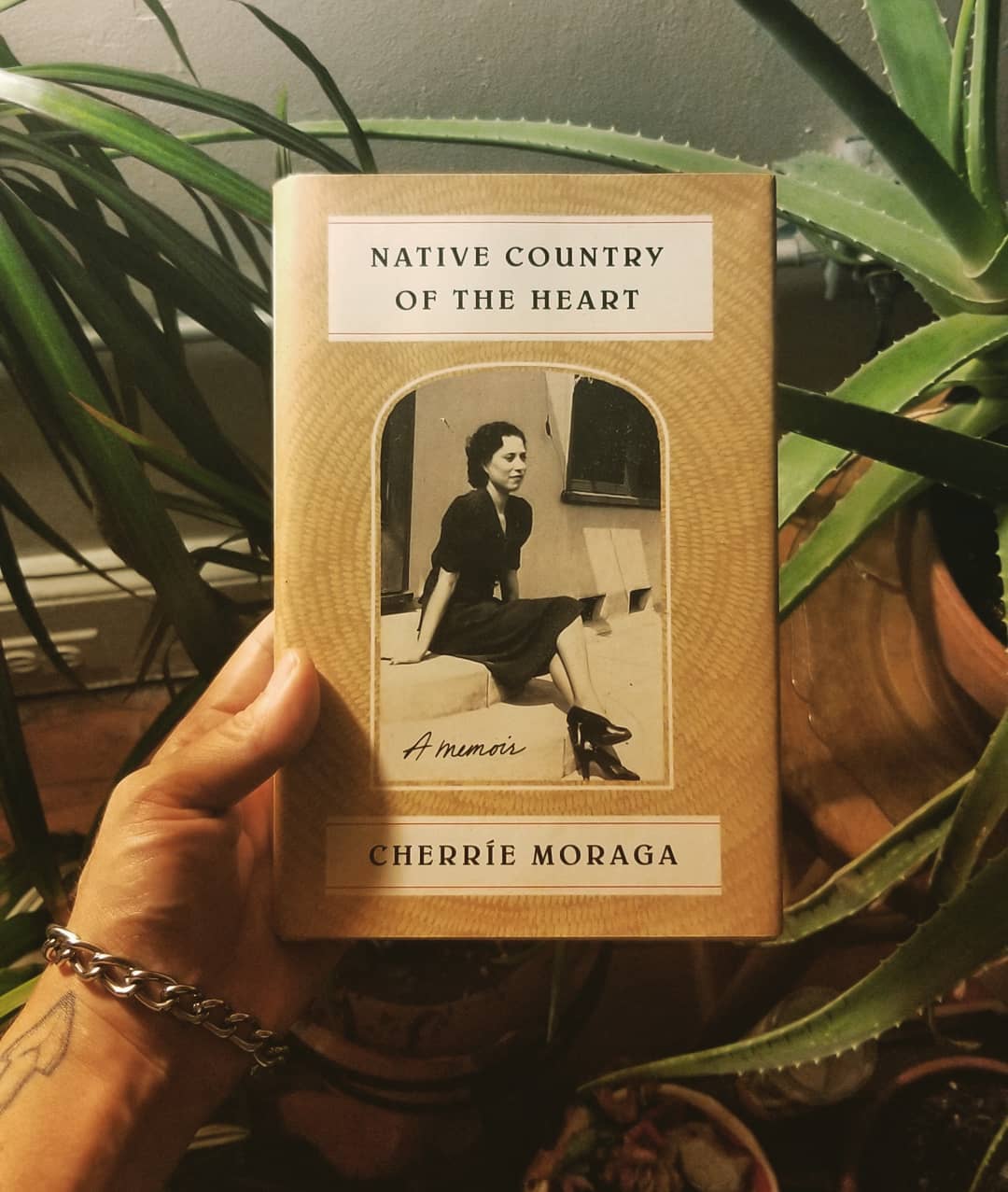 Monk Reviews Native Country of the Heart by Cherríe Moraga

Native Country of the Heart is Cherríe Moraga’s memoir about and relationship with her mother, Elvira. A friend and I went to go see Moraga speak at the book’s release at the People’s Forum in New York City, and we were both tearing up with deep feels in relation to the passages she read to us. Us raised in the United States with immigrant Mexican parents (although our situations are very different). It was powerful to hear someone from another generation (and a formative generation for many–Moraga co-edited This Bridge Called My Back with Gloria Anzaldúa) respond to audience questions on current political quandaries relating to xicanx identity and latindad, which is fitting given the book itself works through many thoughts about Mexicanism/Mexican’ness as it has/becomes generationally diluted and removed from indigenous origins (especially people whose family lines come from lands in and around what is now the US/Mexico border).

Cherríe Moraga talks about the world surrounding her mother and the circumstances it wrought on her over the years, including her own withdrawn white father and his presence in their family’s life. Not just him though–the effects of assimilation/aspiration into white American society come under scrutiny time and again. And not just that, but the ways patriarchy and the brutal surveillance of a colonizer Catholic society contains someone designated ‘woman’ and ‘not indio/Black’ in said society.

I can’t say I enjoyed this book as much as I simply wanted and needed to read it. If you are like me, and you are looking back at the world that shaped your own parents and family, it is a good commiserating read. Before reading it, I didn’t know Moraga was a half-white mixed person like me (my words, not hers), and that made me think a lot about how many times I’ve read or heard about mixed people of color’s shitty/pathetic emotionally absent and/or selfish white fathers. How the mother’s non-dominant culture becomes impressed upon the child. The formation of a non-white identity despite being “half” white. In the book, her white father has the presence of a limp piece of bread, and she even remarks that when her mother finally dies her father’s first response is to worry about himself.

A personal aside: When I went to get my book signed, Miss Moraga asked me for my name in Spanish. I responded with my chosen name in English (as it often needs repeating), and I saw her expression change so quickly. Internally I scoffed (seemingly scorned, however gently) and sad-sighed–revealed as just another someone one circumstance removed from a purer, more meaningful culture, maybe a poser or faker or appropriator. Just one more violent unspeakable situation removed from relating to a truer identity that would make me more legible to a dominant group or more righteous in refuting my position in anti-black/white supremacist society (I say this with something like sarcasm). Or if I’m honest, the bite of exclusion where being able to speak Spanish would have absolved me, just a little bit, of my otherwise suspicious whiteness. (I really appreciated Wendy Trevino’s poetry for going in about white supremacist cultural norms in chicanx identities, btw.)

If you never heard me speak of it before now, I am of Mexican heritage on my father’s side (and he is read as racially ambiguous, tho constantly interrogated by white people in his restaurant jobs–and his own self identification seems to change/ebb/flow over the years). I was much more vocal and vulnerable about this and my own Mexican/xicanx identity in the high era of tumblr. It’s since become questionable to hash out my personal identity quandaries in cyberspace public, and in the end aren’t so many of us mixed white people just WHITE in the black/white race binary??? (And you know I believe all binaries are false.) I think there is something to confront and deal with there, an interior work, while still holding on to our myriad home cultures and strange/oppressive/violent/othering treatments in society.

For me, Native Country of the Heart was one of those powerful reads about someone’s own life and own mother and the mysteries of her life that can only be pieced together from a lifetime of observation/reflection and stored memories imbued into that person’s objects and dwelling spaces. Reflection born from the difference between you and your parent’s experience in the world, and the cultural/racial/class norms you are all subjected to the genocidal settling of what we now call Mexico and the United States by what we now call Europeans remains a haunting, and I think we’re all caught up in it no matter who we are on this land. I think these sorts of memoirs that reflect upon one’s own family, that ruminate over the circumstances of violence leading to your family’s assimilation and forced forgetting, and the honoring/remembering of what is and was lost–it’s just one step, a baby beginning step to cycle breaking. Maybe.