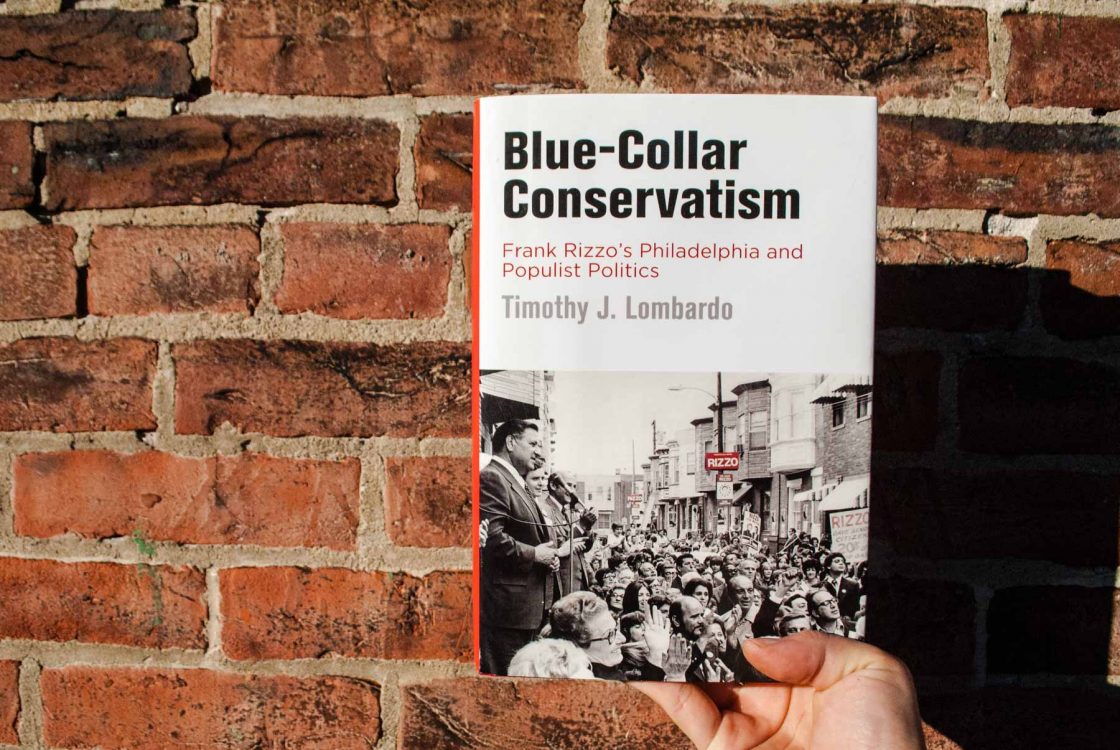 The postwar United States has experienced many forms of populist politics, none more consequential than that of the blue-collar white ethnics who brought figures like Ronald Reagan and Donald Trump to the White House. Blue-Collar Conservatism traces the rise of this little-understood, easily caricatured variant of populism by presenting a nuanced portrait of the supporters of Philadelphia mayor Frank Rizzo.

This is a book that all Philadelphians should read. Ideally as a young teenager, for group study. Rizzo is a name in Philly like Mumia—one I grew up hearing all the time, feeling only bits of residual sentiment about what brought it to mundane prominence. I, for one, think it’s really easy to grow up in this city, and experience the repercussions of history here, shit you can see and feel all around you, that layers the everyday way people act with a tangible quality—and it’s something that makes you resent transplants and people from cushier upbringings and more seemingly peaceful or beautiful or glamorous parts of the world, when they don’t have that shit and seem to be unaffected by all the weird harsh aspects of this town that shaped who you are. Philly is a city historically, chronically mismanaged, segregated, squandered, run by incompetents and tough guys and slime balls who sell everyone else but their boys out. There are reasons white Irish, Italian, Polish, and other “white ethnic” groups were able to establish themselves where they did in this city, and a decent amount of the ones that I recognize in my lifetime were enacted by Rizzo, his policies, and his supporter base.

This impressive book offers an important new interpretation in that it connects white-ethnic politics in Philadelphia and similar cities to the broader history of conservatism in a nuanced way that goes beyond standard narratives of backlash. Here, Timothy J. Lombardo shows that blue-collar conservatism emerged out of the interaction of culture, identity, neighborhood politics, and the interplay of race with spatial segregation in the city and the metropolitan region”

This book located a lot of exactly where that shit came from for me. Rizzo was a working class South Philly guy, child of one of many southern Italian immigrants that flooded into the city after Italy’s unification in 1861. He was a tall, imposing, handsome, high charisma macho type guy, beloved by his neighborhood and all the other “blue collar” white people who hadn’t realized it’s the wealthy developing class fucking their communities up and not the Blacks and queers. Rizzo was a cop. He was anti-Black and seemed to make a brand out of his open disdain for anything he saw inappropriately feminine (fags and trannies and intellectuals). He was a cop that became captain that became police chief that became MAYOR. TWICE. In 2021, it’s very easy to compare his flashy, bullish, shock-value nice guy demeanor to Trump’s.

This book also pulls the thread of this city’s progressive political movements and liberal managerial class elite who drive/usurp those movements, people who are (STILL) actually from the wealthy suburbs, who are somehow ever in decision making positions, serving up city policy and development without actually living IN the city. This book talks about 60s era progressive policies, riots in Black neighborhoods over the actions of killer cops, police reform back THEN, and all the weak-willed concessions and failures and the changing of the political landscape through the 50s~80s.

I was reading this book in the summer of 2020. Some of the same exact shit was happening, in the same places. Liberal democrats were fumbling to become figureheads ready to sell out working poor and Black communities in the interest of “reform”—shocked and dismayed and pretending not to hear the DEFUND chants in the streets.

My copy of this book is underlined to hell, penciled circles around passages detailing names of notable Philadelphians and those junctures in history where that pigheaded decision making from white supremacist leadership put this city in the state its in now. I’m talking why SEPTA is the way it is, why the Northeast is where it is, why FDR Park is the way it is, why downtown is the way it is, why the MOVE bombing happened, and so on and on. Conceding to white comfort has fucked this town over for generations, and it’s a bitch to see nearly identical shit play out again and again.

For all my Philly history buffs, this is definitely a must-read. It’s honestly a must-read for all the political zine writers, anarchists, and basically ANY transplant that becomes involved with grassroots organizing here. Learn about this shit. Learn about who did what when—the same shit will keep going on otherwise.

I waited a bit too long to write this review, so any top-of-the-mind critiques have long since left my mind. I was how-bout-that-impressed by how much acknowledgement there is by the author about the experiences of Black Philadelphians and about the explicit anti-Black nature of MOST ALL reactionary political tactics by white ethnic Philadelphians, but I remember feeling like it still fell short and failed to be explicit enough in choice areas, seemingly in the interest of academic impartiality. So, there’s that. There’s also a distinct lacking reference to radical political groups outside of MOVE, if I recall correctly—many things are attributed to liberals or democrats (or hippie intellectuals), and rarely (maybe not at all) socialists, communists, abolitionists, homos.

As far as content matter, it’s an academic history book, but it’s a very straightforward text that I found easy to read and follow. Certainly an easy read compared to academic books on theory. I think if you can read Wikipedia long entries, you can read this comfortably.

My main issue with this book is that it’s published by the University of Penn Press LOL (Penn who stole remains and owes reparations to MOVE, Penn who pays no taxes to the city while public schools mold over, Penn one of the largest employers and landowners in the city), and so it’s expensive and only available as a hardcover. If I come across a PDF to pass, I’ll link it here.

In the meantime, I highly recommend getting into the thorough Encyclopedia of Greater Philadelphia articles mentioning Rizzo, to get you started.