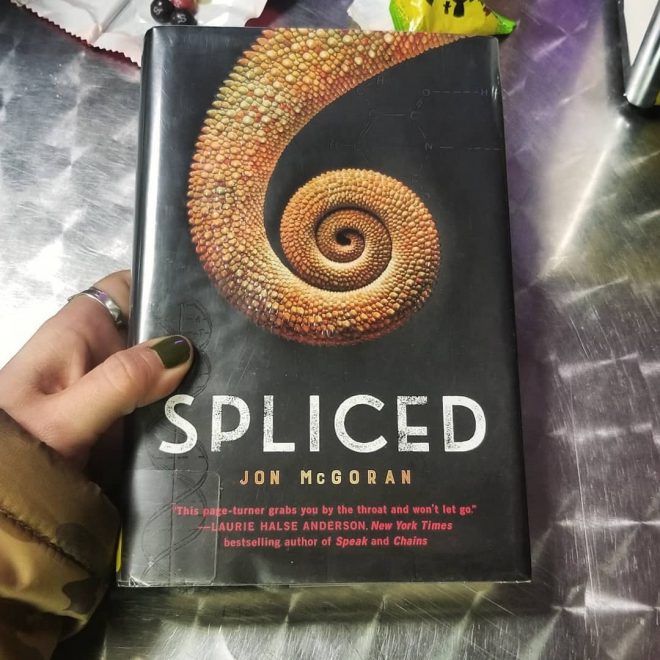 This review was originally posted direct to my Instagram on December 23rd 2019, so I will keep all the markup from that original here.

I met the author of SPLICED while doing the live speculative fiction panel for @weirdkidswanted (ep11). He mentioned this YA book of his over the course of the panel talk, saying it was set in Philly, and for that I was like alright lemme read it. I don’t normally read YA. Can’t say why. I’ll chalk it up to having spent SO much time in role play chatrooms and fanfic archives, I’m still spent from that when it comes to YA. This book was pretty straightforward though. Set in a soft dystopian near-future Philly where a group of genetically modified people (largely youths) stand to lose their personhood rights thanks to a Genetic Heritage Act some zealous/fascist/Christian Humans for Humanity (H4H) movement is pushing.

It felt a little…dry? I’ll get into that shortly. It’s definitely set in Philly, tho. In my head, it reminded me of the Philly where my Catholic school was, somewhere in the northeast near Bustleton Ave, and then where it circulates around lower income and Black/brown/mixed race neighborhoods like Olney, Lawncrest, maybe even Mayfair, and then up to whiter parts in the greater n’east, with Roosevelt boulevard cutting through it all. I bring the logistics up cause the characters, from what I could tell, are largely described in terms referring to European features (light eyes, tousled hair), or they don’t get physical descriptions.

For that matter, half the characters are chimeras, kids who have joined a protesty youth subculture centered around body modification involving ~splicing~ one’s DNA with that of an animal’s. When McGoran described this premise during the panel, I immediately thought of Batman Beyond and those animal-splicing body mod background baddies of the dystopian future Gotham City.  So yeah. It’s like not far in the future Philly. Only rich people can afford cell phones anymore. After flu epidemics and infrastructure collapsing, the city border is in flux and surrounded by largely abandoned, quasi-crumbled neighborhoods referred to as the ’zurbs. (It really was in my head that one side of Roosevelt blvd was still in the city, while the other side was officially cut off.)

The main char is a teen girl whose best friend has an abusive, H4Her, former-illegal-fracking-mine-operator-turned-area-cop dad. The two teens both have a parent that died in a flu epidemic, and they were both aspiring to go to Temple University (where I went) after high school, but her bestie’s dad sucks so bad, the kid runs off and gets spliced as a fuck you to the abusive home situation. But the splice goes wrong. And allll this trouble unfolds from there. Then it takes off as a series of increasingly fucked events, many of which serve as exposition for the socio-political standings of the area, such as the nefarious goings on in the smaller towns (wealthier & impoverished) outlying the city.

Many times reading Spliced reminded me of so many times I’d been in situations as an adolescent when shit just got more escalated, bad, and dangerous. Having to travel through unfamiliar places you’re not welcome, shouldn’t be, and can get harassed in, especially as a minor. Woof. Didn’t really enjoy reading it, but it felt kinda realistic in this way, and in another, not too too deep. Police are depicted as both corrupt, violent, and yet still as people, as are some H4Hers that the protag encounters in a small town outside the city.

Although this is the start of a triology, I don’t think I’ll read the next book. But there was lots of world-building details that I appreciated, which many times made me feel like this jawn was set in a pre-cursor time to my own All That’s Left stories, specifically in the realms of cordoned off private infrastructure and drastic social divestment due to catastrophes like sickness, flooding, and poisoned unlivable land.

Spliced also manages to weave a tale of very real-life shit like how the rich fund fascist initiatives in local government, without being super politically explicit or detailed about it. I’m curious to know what an actual 11 or 13yr old would think of this book (series). While I enjoyed the read, it struck me as very white Philly/Philly burbs Montgomery county-centric in this way that made it also feel like it could be anytown USA, and hence more relatable to a mass market (and thus dry for my tastes). I’d recommend it if there were any Black or characters of color, but…alas.